Why not go on a Pokétour with limo services in LA? Have you
ever wanted to catch a Bulbasaur in Griffith Park? Or how about looking for a Pikachu in the Malibu Canyons or a Magikarp at the Santa Monica Pier? Sad about all the Pokémons and Pokéstops you have to pass by on the highway? Or just simply looking for the best birthday party idea for your kid? The perfect excursion for Pokemon fans of all ages is here! Let’s see what creatures you can find on a limo trip to your destination(s)! Leave the driving to the professional and let us chauffeur you and your group to any Southern California destination to see what Pokemons you may be able to find! The virtual monsters are definitely back since Niantic’s release on July 6th, and they’re more virtual than ever before. For anyone remembering the Pokémonsters from the 1990’s, playing Pokemon Go with friends in the back of a limousine or Los Angeles party bus of choice will definitely make for a memorable LA adventure!

As Pokemon Go is different than just about every other game out there – you actually have to venture outside in order to discover the gyms, pokéstops and wild pokémons – limo or party bus excursions might be amongst the coolest Pokemon Go birthday ideas. Playing the game while driving can be dangerous and also very irritating, primarily of two reasons: 1) Pokémons and Pokéstops will appear when driving, but is nearly impossible to catch or visit while in movement, and 2) It’s obviously dangerous to try to catch that Caterpie when you’re driving down the 405, no matter how much you eventually want a Butterfree. But by being chauffeured around by limo services, you eliminate the many dangers linked to the game, and you can stop by all the gyms and Pokéstops you want on your way. The final destination may be a stop such as a beach or a restaurant often visited by Pokémons or situated near a Pokéstop or Pokégym. As an example, we recently took clients to the Cheesecake Factory on the beach in Marina del Rey. Not just because of their unbeatable views of the Pacific and their great food and location on the beach, but because this very restaurant also is a Pokéstop where players can recharge on Pokéballs and may get rare eggs evolving into various rare Pokémons. The more rare Pokémons are found at night, while sea Pokémons are found near ocean. The Cheesecake Factory on the beach here is therefore a also a great pick for those looking to catch a water monster. Our limo services group discovered everything from Magikarps, Poliwags, and even a Wartortle.

The hunt for the animated Japanese toon monsters all began when Nintendo released the first Gameboy games in 1996. A few years later, the role video game became an animated TV series that is still broadcast on television today. Ever since, gamers have followed in the footsteps of Ash Ketchum, the charming Pikachu and countless other Pokémonsters. Similarly to the original Gameboy success, Pokemon Go will also let you pick between a preferred starting monster: grass-, water-, or fire (Bulbasaur, Squirtle or Charmander). After picking your beginning Pokemon, venture out in the real world to catch Pokémons. By Pokéstops, you can come by for free Pokéballs, potion, razz berries, incense, eggs and more. While you can utilize an egg incubator for your egg to eventually become a Pokémon, potion can be used to heal wounded Pokémons. Razz berry can be used to weaken Pokémons you’re figthing, while incense will attract Pokémons to your location for 30 minutes. Kids’ birthday parties can be fun when adding limo services to drop by various Pokéstops and gyms for battling!  Several Malibu wine tour customers loved their recent visit to the Malibu Café in the Malibu Canyons, where they could enjoy refilling Pokéballs at the Pokéstop and go hunt for new creatures by the creek. Follow up by a visit to Malibu Family Wines for a real life safari with real animals such as zebras, bisons, camels, alpacas, and other animals. For a Pokemon Go tour and Malibu wine tour closer to the Pacific, check out the Rosenthal Tasting Room by the ocean!

A popular thing lately are celebrating Pokemon birthdays for kids in a rented limo or Los Angeles party bus. Trending Pokemon Go birthday ideas include trips to the Los Angeles County Museum of Art (LACMA) where there’s not only a Pokéstop, but a Pokégym where players can train their Pokémons and battle for control of the gym. When players have reached level 5 they will get the chance of joining a team (and also being able to attend battles). Players will get the option of picking between team blue, team red, and team yellow. While gyms allow you to battle for control of the gym, you can also put in your own Pokémon or train against fellow team members if the gym already is in your team’s control. Either by fighting other teams or training against your own team, your experience and XP will increase during every battle. After having had control of a gym for over 24 hours, click on the Shop menu for rewards. While you may spend your own money – roughly $1 for 100 pokécoins – visiting Pokéstops allow you to pick up all the equipment you need for free. Places such as LAX are packed with various Pokéstops, but when driving it can prove to be a challenge to catch all the airport Pokéstops and Pokémons. Renting an LAX sedan service may save you time and money – we know where the Pokéstops are, which makes an airport trip a rewarding Pokémon experience. You can also ask your LAX sedan service to drive slowly and repeat a few round near the gates. Many looking for limos for rent in the Los Angeles area have told us about how effective the lure modules are at the Pokéstops for attracting nearby creatures. To use a lure module, simply tell your limo services chauffeur to swing by a Pokéstop for a 30-minute period in order to catch as many as possible. The lure module accompanied with incense will double your chances of finding Pokémons, while nearby players only benefit from the lure module. 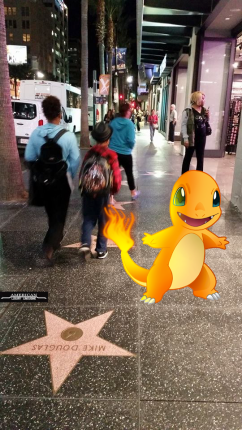 Barnsdall Art Park is another tremendously popular Pokemon Go destination for Los Angeles party bus and limousine rentals which has both a gym and tons of Pokéstops. The Hollyhock House here is a Pokéstop. Art has never been more fun! Renting a Los Angeles party bus to cruise down Hollywood Boulevard and the Sunset Strip has equally never been more fun. Here you can enjoy one of the city’s most iconic destinations while stopping by gyms and Pokéstops to recharge on Pokéballs and other necessities. Limousine rentals heading for the Santa Monica Pier might just get you that Parasect you’ve been looking for, while the Grove is a great place to go for a stroll amongst a highly concentrated place of Pokemon Go trainers. So is the Union Station with its many historic spots to refill on Pokéballs. Whether to search for a Pidgey at the airport with an LAX sedan service or to find the rarest species at nighttime with a Los Angeles party bus – limos for rent may be the best and most rewarding way of playing Pokémon. Combining a kid’s birthday party with some Pokémon hunting may be the best birthday ever! Especially when combined with a luxurious ride by limo services!